Unwittingly demonstrates why the most popular bullying solution isn’t working

The current October is the twelfth annual National Bullying Prevention and Awareness Month in the US. Like many other organizations and corporations, Burger King has taken advantage of  the opportunity to promote its brand by producing a bullying prevention video. With its vast advertising budget and influence, the video has unsurprisingly gone viral, picked up by news media the world over.

The truth is, the video is excellent. The problem is, it shows why it is foolish to rely on the bullying solution it is promoting.

Relying on the popular advice that doesn’t work

Burger King is an expert at fast food. It is not an expert in solving the problem of bullying. To do its part in the campaign to end bullying, it relies on what the academic bullying field considers best practices. Unfortunately, these “best practices” aren’t working well, which is why bullying is still being called an epidemic after almost two decades of anti-bullying efforts, bullying has become the number one fear of parents, and bullying-related suicides and homicides have been escalating. 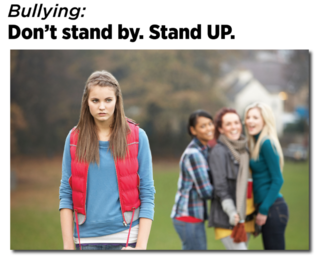 Source: US Dept. of Justice/free image

Virtually every leading anti-bullying organization and most programs insist that the key to ending bullying is bystander intervention. Rather than stand by passively when schoolmates are being bullied– or even worse, actively encouraging the bullying – students are urged to stand up for victims against their bullies. A respected journal article, based on the teachings and research of the most revered bullying experts and researchers, is titled, Bystanders are the Key to Stopping Bullying.[1] It does do an excellent job of substantiating that bystanders rarely intervene to help victims and of explaining why they don’t. However, the article does nothing to prove its case, that bystanders are they key to stopping bullying. If anything, it should dash our expectations of bystanders.

The abstract states, “Peer bystanders provide an audience 85% of instances of bullying. If you remove the audience bullying should stop.” Reminds me of the popular wisecrack retort to “If…” assertions: “If my grandmother had balls, she’d be my grandfather.” Does anyone know how to remove the audience?

The idea that bystanders are the key to stopping bullying is treated by the anti-bullying field like an established fact. It has been repeated so often that everyone has come to believe it. However, it is actually an unproven hypothesis. Proving it would require researchers to demonstrate that it is actually possible to eliminate bullying by convincing a large enough percentage of the population to change from passive bystanders into active interveners. But every attempt to prove this has thus far failed. If the approach were proven to work, bullying would by now be a thing of the past, and we would no longer have yearly Bullying Prevention and Awareness Months.

The origin of the bystander recommendation

This bystander recommendation was popularized by Prof. Dan Olweus, the Norwegian psychologist who originated the academic field of bullying in the 1970’s and whose program is often called the “gold standard,” serving as the model for almost all bullying prevention programs and laws.

Olweus noticed that most bullying incidents take place in front of an audience of other children, who tend to stand passively by or even encourage the aggressors. By demonstrating their dominance over others in the presence of witnesses, the aggressors enhance their status and pleasure.

It has also been recognized that when a bystander intervenes to help a victim, the aggressor often leaves the victim alone. Therefore Olweus concluded that the solution to bullying is to teach everyone to refuse to tolerate bullying, to stop being passive bystanders, and to actively stand up against bullies. This advice has been universally accepted as the ultimate solution by the academic anti-bullying field.

To encourage us to stand up against bullies, anti-bullying activists often remind us that the Holocaust and other campaigns of mass murder took place because good people stood by and did nothing. The anti-bullying activists apparently fail to consider that campaigns of mass violence are currently going on in the world while we protest from the comfort of our living rooms.

Burger King produced a clever video that intends to solve the problem of bullying by shaming people for not standing up for victims.

The video is recorded in a Burger King restaurant. Two things are taking place. One, there are actors insulting and pushing a high school junior and vandalizing his food in full view of the customers.  Two, the customers are served with “bullied burgers.” That is, the servers smash the burgers with their fist before wrapping them up.

The Burger King video echoes another viral video of a few years ago. College students staged bullying incidents in full view of other students. The great majority of bystanders ignored the plight of the victims and refused to help them, while only a small percentage played hero. The conclusion of the students who produced the video was that the solution to bullying is for people to stop being passive bystanders.

These videos, though, fail to prove the hypothesis. Their producers fail to realize that they only demonstrate how unlikely bystanders are to be the key to stopping bullying.

Most people are not heroes

The great majority of individuals are not heroes. They are concerned with their own personal wellbeing and avoid danger. I am reminded of an incident my wife related to me. When she was in the army several decades ago, she was part of a group of six communication technicians. They were all griping amongst each other about an unfair and even hazardous group punishment by their commanding officer, and scheduled a meeting with him. When the time came, my wife was the only one who dared to open her mouth, while the rest sat in silence. (She was successful, by the way, in getting the punishment annulled. An additional sign of my wife’s uncommon bravery was her decision to marry me.)

We must realize that the bystanders in these videos have not been living in a vacuum. Most are aware of bullying because it has been the most publicized social issue of the past 18 years. They are familiar with the call to stand up against bullies, and this is especially true of the college students, who have been bombarded with anti-bullying messages throughout elementary and high school. A dozen years of month-long anti-bully campaigning has apparently accomplished nothing, except perhaps an exacerbation of the bullying problem.

True, we may be able to convince a small percentage of students to overcome their natural fear and become heroes, but the great majority will observe bullying situations and rationalize why they should not get involved. And that is why the most intensive bystander-based programs produce at best only modest reductions in bullying.

This is not to say that bystanders cannot help. A small percentage of people have always been heroes. Heroes existed during the Holocaust, and they existed in schoolyards. I don’t know of research on the percentage of people who step up to save victims, but perhaps it’s in the vicinity of the percentage that did so in the Burger King video. But they didn’t become heroes because they saw the Burger King video or were subject to any other anti-bullying campaigns. They did it because human nature is such that there will always be some heroes.

Furthermore, heroes don’t always solve the problem for good. If you stand up for a victim, it may stop the bullying at that moment, but when you are not around, the attacks may continue. Standing up for victims does not teach them how to handle bullying on their own in the future. And you may also become a victim yourself. There are kids who have been killed standing up for others.[2]

Another major disadvantage to teaching kids that bystanders are the key to ending bullying is that it simultaneously teaches victims that they are incapable of dealing with bullying on their own. It encourages their feeling of helplessness.

I am also not implying that bystanders should not be encouraged to intervene. It’s just that it will never be the key to solving the problem. Plus, not all interventions are equal. Some are better than others. When I teach kids how to intervene, I show them how to help the victim without going against the aggressor. Everyone comes out a winner.

Is there a key to solving the bullying problem

If bystanders are not the key to stopping bullying, does such a key exist?

It is self-evident the absolutely best solution to bullying is to teach kids how to handle it on their own. Then they don’t need to rely on bystanders. Bullying is a part of life that goes on throughout life, and we can’t expect that there will always be a bystander around to save our children. They deserve to be taught how to handle it on their own.

[1] Bystanders are the Key to Stopping Bullying