Is Private School the Solution to Bullying?

Home Problems with Anti-Bullying Programs Is Private School the Solution to Bullying?

Is Private School the Solution to Bullying? 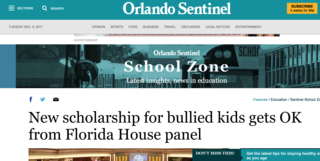 Every nation that takes it upon itself to rid schools of bullying discovers that bullying is a more intensive and intractable problem. Then it ends up having to look for something that will work, though it rarely finds it.

The latest hope for a solution is the transfer of bullied kids from public schools to private schools. Florida has been heatedly debating a newly proposed anti-bullying law called the “Scholarship Hope Program,” with “hope” referring to the aspiration that private schools will solve the bullying problem.

Critics are concerned that this will cost a small fortune and become an excuse for parents to get their children transferred to private schools at public expense. And this criticism is justifiable. What parents would be willing to look for a real solution to their children’s bullying problems if they can conveniently get their child enrolled in a private school? In fact, it might induce parents to dramatize the severity of the bullying problem in the hope of qualifying for a transfer. And since there are one or two kids who are bullied in just about every classroom, this could result in a flood of transfer requests.

There are some other questions that need to be considered:

1. When did private schools become the solution to bullying? Is the bullying problem in private schools any less serious than in public schools? One of my recent articles was about parents who sued their son’s private school because their bullied son ended up committing suicide [1].

Most of my individual clients happen to be students in private schools, and most of the schools that hire me to help with their bullying problems are private schools.

2. If private schools have the solution to bullying, wouldn’t it make more sense to pass a law requiring them to share their secret with the rest of the world, instead of keeping it to themselves?

3. Sometimes a school transfer does, indeed, result in the student no longer being bullied. But this is true whether the change is to a private or public school. To its credit, the Florida bill does allow for the transfer to a different public school. However, if you read the bill, you will see that all the concern is with private schools, probably in recognition of the likelihood that parents will prefer a private school if such an option is available, especially if it is in their neighborhood.

Unless research shows that a child is substantially less likely to be bullied in a private school than a public school, why shouldn’t the law only offer transfers to other public schools?

5. Transferring to a different school is no guarantee that the bullying problem will be solved. Some children get bullied in every school they attend. One example is Jodee Blanco, author of one of the first best-selling books on bullying, Please Stop Laughing at Me. She attended three different schools and was bullied in every one of them. Where will we transfer students who continue to be bullied in the private schools they are transferred to?

6. Bullying goes on in just about all groups because people like to have scapegoats. That’s why there are usually one or two students who are victims of relentless teasing and bullying in every classroom. If the bullied students are sent to a different school, will there be no bullying going on in the class, or will other students end up taking their place as victims? And if so, do we continue transferring them to private schools in the hope that there will finally be no victims left?

The major source of the problem

A heartfelt opinion piece by a parent of a bullied child appeared recently in Florida Today. In “Proposed law gives bullied kids a way out,” Alyson Hochstedler describes the terrible bullying that her son, Gant, was subject to for the past three years, beginning in grade 3.

He was put in a headlock and slammed into lockers, cornered with pinking shears to his stomach, slapped in the face, punched. and then told he would be strangled to death for telling. At one point, Gant was huddled in the living room holding his knees refusing to go to school. He fought severe anxiety and we sought outside counseling where we were told he had symptoms of Post Traumatic Stress Syndrome. Each day was an exercise in coaxing our son back into a place that held no guarantee of his safety while continuing to go to class with the boys who tormented him.

Our school was A rated and had a zero bullying tolerance policy… We followed the structure in place, first going to the teacher, the guidance counselor, and then to the administration and then to the county.

The assumption is, of course, that schools are capable of guaranteeing safety from bullying, and that turning to the staff to implement and enforce their zero-tolerance policy will provide children with that safety.

And it is not only parents who believe this. Ms. Hochstedler writes:

It is difficult to read a recent column by Leon County School Board [member] Rosanne Wood opposing House Bill 1, which would create the Hope Scholarship.

Ms. Hochstedler’s opinion piece was, in fact, a reaction to Ms. Wood’s opinion piece, “Proposed law not the cure for school bullies or bullied.” What does this board member, a former school principal for 32 years, say about bullying in schools?

I support zero tolerance for student bullying. Florida Statute 1006.147 requires every public school to investigate, report, and protect any student who is victimized by bullying.

Like just about everyone else, including the parent who criticizes her, Ms. Wood believes that zero tolerance, which requires the school to “investigate, report, and protect any student who is victimized by bullying,” is the solution to bullying.

But that is exactly what Gant Hochstedler’s school did. When he and his parents turned to the school staff, they followed policy and began the process of investigating, reporting, and protecting. And it didn’t solve Gant’s problem. It intensified it. It’s because the school got involved against Gant’s bullies that they wanted to strangle him to death. Remember: Alyson Hochshtedler reported that Gant was “told he would be strangled to death for telling.” Getting people in trouble with the authorities is guaranteed to make them hate us [2].

In almost every bullying case that makes the news because of serious violence, the violence occurs after the school gets involved following anti-bullying mandates.

Anti-bullying laws are not the solution

No, anti-bullying laws are not the solution to bullying. They are a Catch-22; the very effort to comply with them tends to make the bullying problem worse [5].

This is not to say that getting rid of these laws will put an end to bullying. It won’t because bullying has always happened and will always continue to happen, especially within the governments that we are beseeching to solve the bullying problem – because it is part of our nature, a result of the drive for dominance. But getting rid of these counterproductive laws would be a good start. At least we’ll be back to the level of bullying we had before their passage made everything worse for the entire school community.

What is the solution to bullying?

So if anti-bullying laws and zero tolerance are not the solutions for bullied kids, then what is?

As I’ve been arguing for almost two decades, the solution is to teach kids how to handle social difficulties on their own. It is much easier to learn this than it is to learn the 3 R’s. They will be able to put an end to the problem quickly, and without getting anyone in trouble. But kids need to be taught, for they are not likely to learn on their own. One trained school member is enough to give these lessons to the entire school body and to provide individual help to the students who need it.

Florida wants to spend $40 million dollars to send bullied kids to private schools, a questionable solution that teaches children absolutely nothing about handling life’s problems. With that amount of money, all the children in Florida can be taught how to stop being bullied.

Is your child being bullied? Almost two decades ago, I wrote a free manual that teaches children how to stop being bullied. It has helped countless kids, and may be able to help yours as well. To receive, How to Stop Being Teased and Bullied without Really Trying, and two additional useful free manuals, sign up for my newsletter mailing list(link is external): https://bullies2buddies.com/resources/newsletter-signup/

[1] : The “School Did Nothing to Stop the Bullying” Lie https://www.psychologytoday.com/blog/resilience-bullying/201608/the-school-did-nothing-stop-the-bullying-lie
[2] Why Telling on Bullies Backfires https://www.psychologytoday.com/blog/resilience-bullying/201405/why-telling-bullies-backfires
[3] Evenson, A., Justinger, B., Pelischek, E., and Schulz, S. “Zero Tolerance Policies and the Public Schools: When Suspension Is No Longer Effective.” NASP Communiqué, vol. 37, no. 5 January/February 2009
More
0
Share